*This article deals specifically with hockey, but the arguments against recruiting early apply to most sports.

The need for reform to the college recruiting process has perhaps never been made clearer than in the past year as the race to recruit earlier and earlier means young boys – “guided” by their parents – are making commitments to play college hockey in three, four, or five years from the time of their commitment. This situation is unnecessarily hurting youth athletes. In their most formative years, players are being labeled as “star” hockey players. Stories are plentiful of athletes in all sports who were destined for greatness but ultimately failed to reach the heights others imposed upon them. We don’t hear the stories of depression and the struggles that many of these athletes must go through when their playing careers end.

Like last year, we are seeing the trend of earlier commitments continue. Last January, 52 hockey players committed to play college hockey in 2020-2021. Today, a total of 127 athletes have made a verbal commitment to play college hockey three years from now. Under the current rules, colleges are acting risk-averse – they don’t want to lose talent because they won’t commit early, so many schools seem to be giving out commitments as fast as they can. For some schools, I have to ask, “who haven’t they offered a scholarship to?”.

Parents, players, and our youth hockey culture is major part of the problem. The desire to be considered elite and the social value of verbally committing all contribute to a hockey culture that wants to label kids at a younger and younger age as college-bound. The verbal commitment does not guarantee them anything, so why rush it? If we simply didn’t allow players and their parents to tweet or otherwise publicly announce a commitment, would all of these players still commit?

While I do not know the exact policy needed to fix this situation, I do know there are many compelling reasons for why it needs to change:

A verbal commitment doesn’t mean anything if you don’t continue to improve and develop the skill set necessary to play college hockey. There are plenty of stories of players committing, stagnating, losing the passion for the game, and ultimately not playing at the school they committed to. We just tend to forget about them. A verbal commitment with a freshman high school player is NOT validation of their ability to play college hockey today but rather an estimation by the college team that this player will be ready and able to play in 4-5 years.

If we simply didn’t allow players and their parents to tweet or otherwise publicly announce a commitment, would all of these players still commit?

There can be up to a five-year difference between an athlete’s biological and chronological ages. That is, one freshman might have hit puberty early and is biologically 17 whereas another freshman might be biologically 12 years old. Which one do you think looks better on the ice in almost all cases? It is very hard for scouts to identify future talent. Turnover among the elite ranks is high even when male athletes hit 16 and 17 years old. The earlier a school recruits, the more likely a player’s future projections could be off. Early recruitment punishes those skaters that will simply hit puberty later.

Players should focus on development during these crucial years. Most male athletes are in a very important training window at 15 and 16 years old. Speed, quickness, and explosion can be developed much faster for most players at these ages. Yet, prospect tournaments (high cost, low training value), out of town travel, phone calls, emails, and the rest of the recruiting process just get in the way! What is better for a sophomore athlete – speed work on the track for an hour or a tourney in Chicago?

Were you able to make a decision about where you wanted to attend college so you could pursue a career of your choosing at age fifteen? If not, then perhaps this is also a good reason to delay recruitment. Most freshman athletes are unable to fully realize the long-term impact of a college commitment. In addition, who feels good about placing this kind of pressure on young athletes? Ultimately, college recruitment is a business deal. The college is providing a free or reduced cost investment in exchange for an athlete’s performance. What happens if colleges don’t get their return on investment? And will earlier and riskier recruitment force them to “diversify their portfolios” with larger and larger recruiting classes?

Committing kids during such formative years accentuates a major problem in sport – self-identification by youth and high school players solely as athletes. Yes, I love sports and I want our youth to identify as athletes, but not to the detriment of everything else in life! Wouldn’t it be nice to recruit a high school player that is a national honor society student, great friend, amazing teammate, etc.? “

It is easy to see how a continuation of the current college recruiting trend could result in harm to high school athletes – mentally, athletically, and academically. At the same time, the current set up puts college recruiters in a tough spot. They can reduce the risk of losing talent by recruiting earlier but then they also increase the risk of making a mistake. Let’s fix the situation and give colleges a recruiting framework that works better for high school and junior high athletes’ long-term development on the rink and in the classroom.

*All data is taken from http://www.collegecommitments.com/CommitList.aspx?a1bdi=NCAAD1 as of September 12th, 2017. 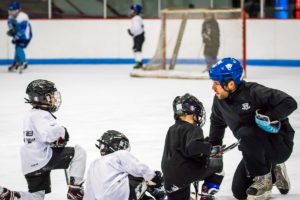 In a world where eight and ten-year-old players are labeled[...] 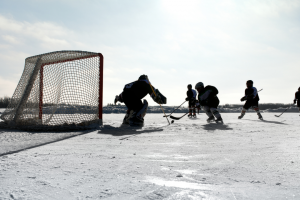 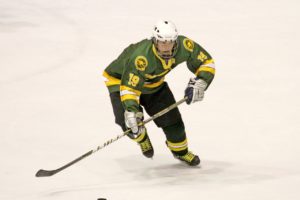